The Oncology department at Alexis Hospital is equipped with most advanced Varian True Beam SVC Linear accelerator. It has been intricately networked to CT scan simulator (Siemens 128 slice) and MRI scan (3 tesla) with DICOM image transfer capability makes it one of the state- of-the-art Oncology setup with all treatment under one roof. 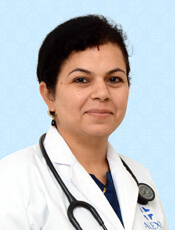